A Thicket of Thorns 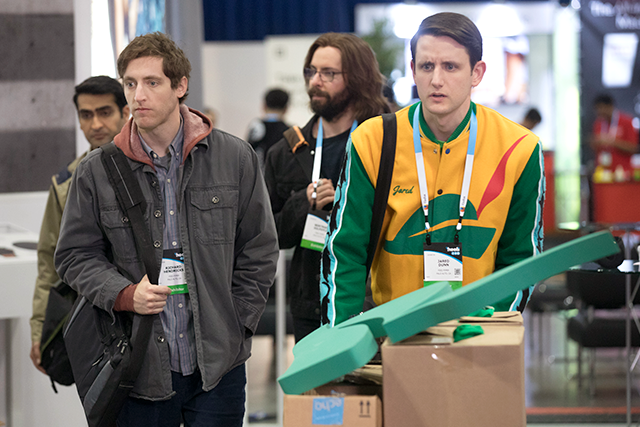 Hello, readers. My apologies if this post lacks my usual pluck, but it has been a trying week. The boys at the home and I used to play a game called “Rose and Thorn,” ranking the highs and lows of our day, and, well, these past few have been a thicket of thorns.

First, Erlich announced that he would be journeying to Tibet, and I’m confident he did not research the necessary vaccinations before departing. So there’s that to worry about. Second, we attended Hooli-Con, which was a ticker tape parade of disillusionment.

My singular purpose there was to promote our Space Saver app, and I toted Pied Piper banners, caps, and foam fingers — all the usual showstoppers — to do so. You can imagine my disappointment when I saw our booth was located in the middle of the row, granted only a sad folding table and chairs like a recent divorcé’s dining room. No matter, I thought. I’ll forge ahead. I’ll hand out pamphlets with the zeal of a pilot during the Blitz.

My brief moment of optimism ended when I overheard some unnerving discussion back at the booth. I put on my noise-cancelling headphones, but even Terry Gross couldn’t calm my nerves. I closed my eyes, Uncle Jerry’s words echoing in my mind.

If I had to pick one “thorn,” though, I suppose it would be witnessing a hero succumb to the worst of his impulses, prioritizing a childish prank to temporarily salve a wounded ego over the security of his colleagues. Watching the violent sparking of several HooliPhones wasn’t ideal, either, but I have to say this confrontation with moral fallibility was the low point for me, personally.

Anyway, I’m off to search for a “rose”! I’ve almost earned enough PeaceFare points to host a virtual food drive, and that will feel good.